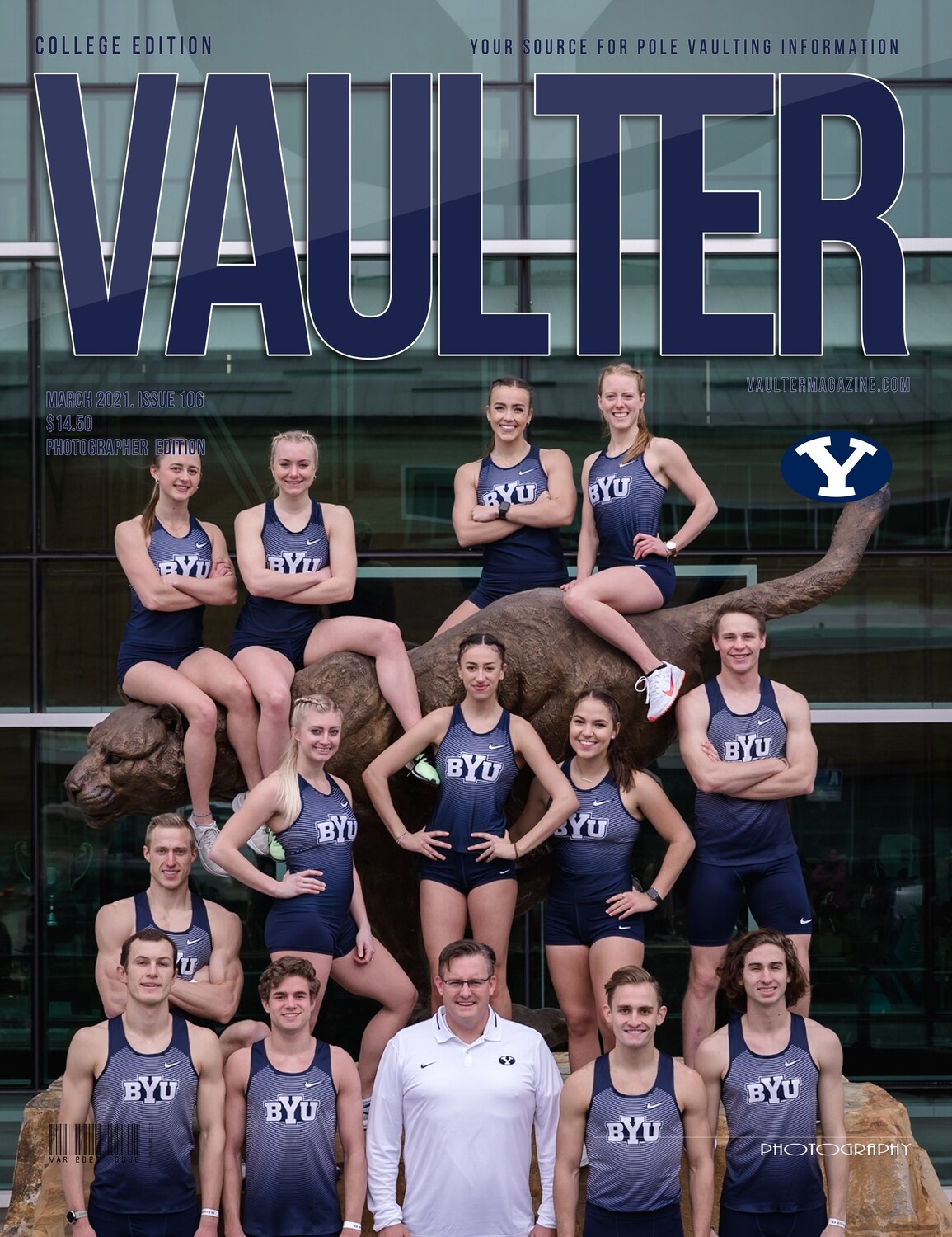 March will be full of madness; we are calling it now!

So far, the Texas Relays has announced that they will not have a high school section or individual section for their event. USATF Indoor was canceled and now all the hope will rely on the outdoor. We are now able to train with high schools and clubs together for the first time in California. Dual meets will be allowed, but so far, that is all that we know. Save the date, Vaulter Magazine will have High School and Middle School Nationals July 2nd and 3rd, 2021.

For the cover of the magazine, we traveled to Utah to see BYU for a photoshoot. The place was pumping with a meet as the snow fell in sheets. This team is one to be admired with some of the best vaulting in the nation. “BYU’s men’s vault squad is the #2 squad in the country, following behind South Dakota.” This team and their athletes are sure to impress in 2021 with an abbreviated season. Good job, Sara, great read.

NCAA 2021 predictions by Matt Berry with Pole Vault Atlanta. Matt is no stranger to our magazine and always has amazing insight into all things pole vault-related. A top-notch coach in Atlanta Georgia, his insight is key. “If I were a betting man, I’d say the SEC’s take four out of the top eight places in the vault this year with Ms. Gunnarsson standing atop the podium.” For the men, “If I was a betting man, I would say Lightfoot takes his first NCAA crown in a ten cm victory over friend Zach Bradford of Kansas.” There you have it, but there is more. Have a read and see who the spoilers are and so much more. Thank you, Matt!

Bubba Sparks is writing about clubs and the ability to save the sport through their dedication and optimism. “Here’s what I want to do; create an interactive groundswell of recognition for how we are being served and honored by these great leaders and facilities.” Bubba is on a mission and now is the time to showcase your club in front of the world. There are details in the article and an email to have your story. Thank you, Bubba!

Olympics or no Olympics, that is the talk of the town. The way that they are turning the pandemic around, many think there is a chance. This month, Kreager Taber is back with more information on a multi-National attempt to make the games work this year. “The Group of Seven (G7), a multinational organization including the United States, United Kingdom, Canada, France, Germany, Italy, and Japan, also pledged their strong support for this summer’s Olympic and Paralympic Games during a meeting in mid-February.” Hopefully, they can make it happen and bring all the people together for this event. Heaven knows they will need all the luck that they can get.

April is coming and so are the meets for the Vaulter Magazine training facility. With the gap in the school system, we plan to host two meets per month for the next few months. Next month, we have Alisha Newman on the cover of the magazine and she’s no stranger to the sport. Stay Tuned.