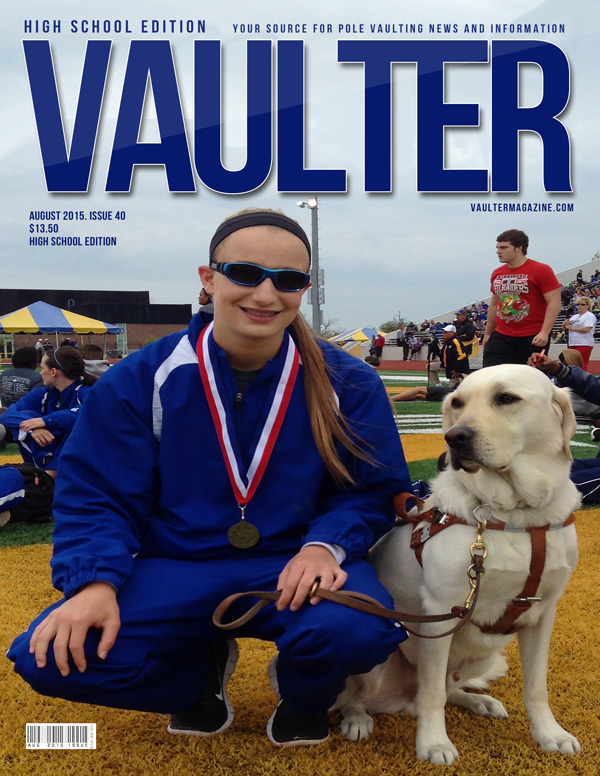 How did summer go by so fast? Thank goodness the warm weather will stick around for a couple more months as school is soon to start. This month we have a pretty awesome lineup for you!

To start we have an article on the Tailwind Pole Vault Club based in Jamestown, Kansas where Coach Dr. Mark Breault (Doc Bro) changes the lives of all the vaulters who come through his club. Not only does he teach how to pole vault, but Doc Bro teaches his vaulters a specific attitude to have—attitude that soon changes their altitude. Doc Bro has great advice in this article that could help you as well, don’t miss it!

Next we have a story on recent high school graduate, Julia Hanks. It’s amazing that in just three years of pole vault, Julia found herself at the top of the podium at high school state. But what is even more amazing is that she grew up without her father. Times can get tough, but competing without one of her parents there would be a deal breaker for some people. Instead of giving up, Julia pushes herself, with the support of her coach and mom, to achieve her goals. She is her biggest motivator and her story is very inspirational. Don’t skip her story.

On our back cover this month we have the well-known event the annual River Vault. I don’t think many missed seeing the event take place on a barge on the Mississippi this year! This article tells you how it happened and what Coach Burish had to go through to get things done. There are also some facts about the club he runs and the University he coaches at, and some possible ideas that may happen at next year’s River Vault. This event is only going to get bigger, so check it out!

On our cover this month is bling pole vaulter, Charlotte Brown. Who knew that pole vaulting blind was possible? Going through many eye surgeries to fix her condition, Charlotte went completely blind her sophomore year of high school. But still, Charlotte does the impossible with the help of her coach and the drive she has to defy gravity. How does she do it? Jump on over to her story and find out!

On a side note, at the end of June, our very own editor got married. With an idea of her college coach, Coach Tom Akers, Sadie bought an old wedding dress and did 3-left swing ups at her club’s Friday Night Vault. Being the first to get married from her club, Sadie has decided to keep that dress and make it a tradition for all the Flying Dragon Pole Vault Club members who get married to wear the dress and pole vault in it.

As always, we thank you for sticking with us each month. Have a great end of your summer and we will see you in September!